#13: Python making the move to GitHub and Dropbox is stepping back from Pyston

This is Python Bytes, Python headlines and news deliver directly to your earbuds: episode 13, recorded on February 13, 2017. In this episode we discuss Python making the move to GitHub and Dropbox stepping back from Pyston.

This episode was brought to you by Metis: The Data Science Bootcamp company.

#1 Brian:Pyston no longer sponsored by Dropbox

#2 Michael: CPython is coming to GitHub

#3 Brian: Using functional programming in Python like a boss: Generators, Iterators and Decorators

#4 Michael: It's metaclasses all the way down

#5 Brian: Lambda Functions in Python: What Are They Good For?

#6 Michael: Multi-threaded SQLite without the OperationalErrors

Followup: Japronto not production ready: “Japronto author here: As stated in the README you should not build anything serious with Japronto now because it's gonna probably eat your laundry. Remember it's hand coded in C and this needs a lot of testing. On the top of that I plan to do several iterations of API changes in a largely incompatible ways. I hope though it's gonna make a serious player in the field one day.

If you wanna a decent async framework then go with aiohttp or Sanic. If you are gonna do typical REST app frontend to a database go with Flask or Pyramid. If you need a scaffolded admin go with Django.” 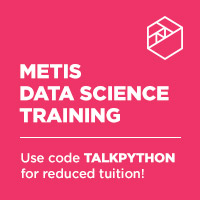